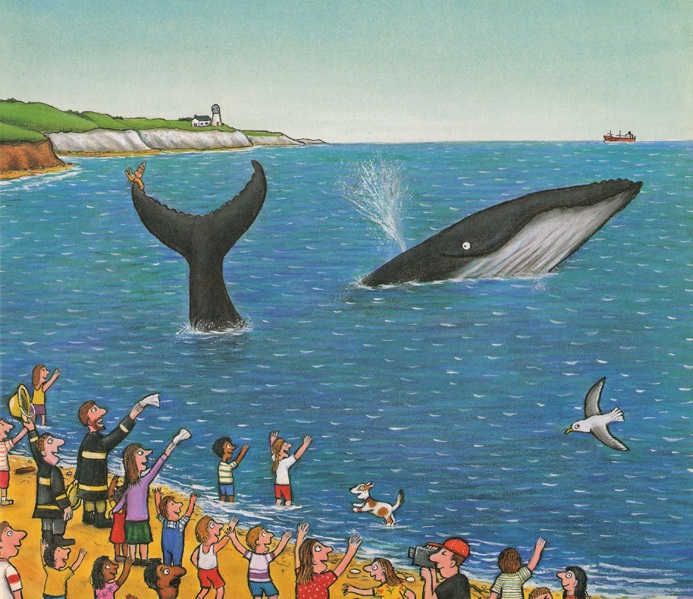 Julia Donaldson’s The Snail and the Whale  Most recent English edition: Macmillan Children's Books, 2018. ISBN 9781509878826. is about a small snail that travels around the world on a whale’s tail, then rescues the whale when it gets beached. In 2005, it won the BBC’s Blue Peter Award for Best Illustrated Book to Read Aloud.

Biologist Sergei Khribar read the book with his son Vanya and gave us a scientist’s take on the story.

It’s true that there are snails that travel on whales, but, naturally, they don’t do so just for fun. All living things have two main goals: to reproduce and to spread out. If those same snails were to reproduce on one cliff, and never travel anywhere, they would very quickly run out of plant matter to eat. For snails, journeys such as the one described in the book are a way to disperse. Whales travel very long distances, passing through warm waters when reproducing and cold waters when feeding.

Along with the harmless animals that live on a whale, there are those that cause discomfort. Barnacles, for example, live on a whale’s skin and once there are too many of them, they start to itch. A whale may try to get rid of these unwelcome guests by entering a river estuary, where fresh water will kill off the barnacles. It may rub against the banks or the ground, where the tide can reach it. In this way, barnacles can indirectly cause a whale to get beached, which is a very serious problem.

That’s exactly what happens to the whale in Julia Donaldson’s book. “This is the tide, slipping away. And this is the whale lying beached in a bay…‘I can’t move on land! I’m too big!’ moaned the whale.” A beached whale dries off, and for a whale, getting dry means overheating. Because of the way their bodies regulate temperature, a whale can’t be outside of water for very long. The book correctly describes what to do to save a whale: “Fetching the firemen, digging a pool, squirting and spraying to keep the whale cool.” From a biological standpoint, this is all exactly right. First and foremost, a whale needs to cool off, which is why they hose it down with cold water. Secondly, out on land, it's difficult for a whale to manage its enormous weight. If you imagine how the whale is built—his mouth, stomach, abdominal and chest cavities can all be compared to giant rooms. Water is a dense environment and when the whale is submerged, his internal organs float, creating an effect similar to zero gravity. When the whale ends up on land, however, the system breaks down and it dies without timely help.

Out in the wild, the relationship between the snail and the whale isn’t quite as equal as Donaldson’s story suggests. While a snail can certainly sail on a whale, it’s powerless to help him in return, except by scraping some growths off his skin. The snail can’t rid him of the barnacles and certainly can’t save him from beaching.

The book actually shows us much more than its two heroes. We also see hungry sharks, numerous fish, corals, anemones, and northern rock barnacles, which are shown as white growth on the rocks. The nature depicted in the book’s illustrations accurately reflects a round-the-world trip befitting a snail on a whale’s tale—there are Antarctic and tropical waters, the author’s native Scotland, the coast of North America, a tropical island, and land resembling the Kamchatka Peninsula. As you read your child the book, you can introduce her to places all over the world, and point them out on an atlas or globe.