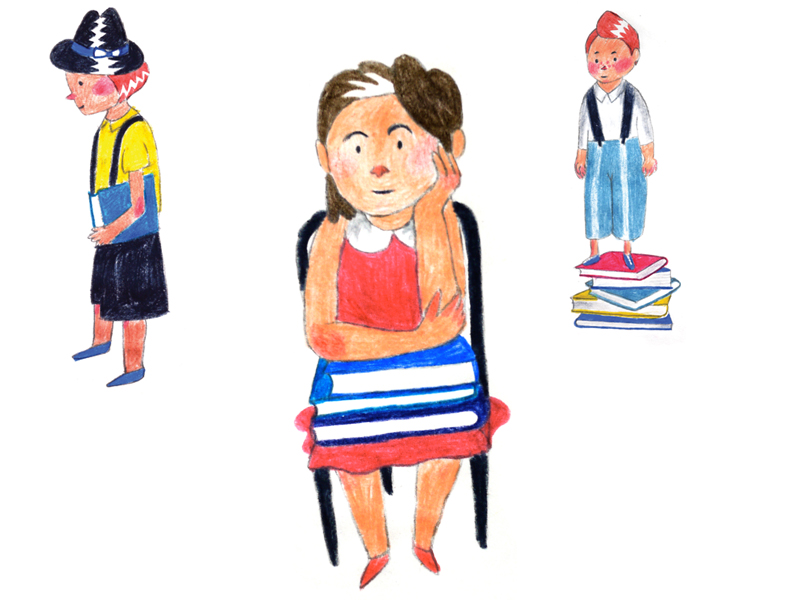 Sometimes, it may feel like, as a parent, you live from crisis to crisis. A baby grows quickly into a toddler, and plunges, along with the parents, into the “threenager” crisis. That crisis transitions smoothly into the crisis at five, which in turn, without ever having ended, becomes the seven-year-old’s crisis. On top of it all, there’s the parent’s own mid-life crisis. The good news is that all this chaos signals development. To top it all off the age crises are joined by—lest you get bored—mini-crises. While they may seem insignificant, they do add a degree of turbulence to daily life. You want to do something about them, solve them, although I’d say the hardest thing here—as with any crisis—is identifying them in the first place.

I only realized that we’d made it through the reading crisis once it was behind us. It may not have been a perfect process, but we emerged at another reading level, one where we found our time with books more simple, enjoyable and interesting.

What precipitated the crisis? It all started with our bedtime read-alouds. My main listener was always my oldest son Nikita, now eight. At a certain point, he went from simply knowing how to read, to reading a lot, and quickly. And no matter what book we chose for bedtime reading, the next day Nikita would finish it on his own, within a day or two. He couldn’t wait for me to pick up where we had left off—it must have seemed unbearably long to wait.

Reading that same book to him in the evening was just like watching a recorded soccer game on the day after the match. The actual game has been played, the score stands as is and the players have done what they could. The next day, even the ball is no longer the same.

In short, I was bored. I understood that nothing I read would surprise Nikita. Still, there were obvious advantages. Nikita could share his impressions instead of working through them alone, which was clearly very important to him. While reading Karlsson-on-the-Roof, for example, he would constantly run up and check in with me to see if I, too, was feeling what he was. Sometimes he would beg for spoilers. Would they catch Karlsson once there was a price on his head? I gave away nothing.

As I read aloud what had already been read, and Nikita re-lived his literary impressions, our youngest, six-year-old Vadim, was left out. While he did sometimes listen to longer books, he could just as easily do without them. Vadim ignored the family readings and instead of sitting beside us, he would be at the table, drawing or writing something down. Whenever I invited him to join us, he would ask if he could stay where he was.

He was listening of course, but it wasn’t quite the same.

That’s when I noticed that I was trying to get out of reading. I couldn't enjoy it, since Nikita had already read ahead on his own. My go-to excuse was that we wouldn’t have enough time to read before our 10 PM bedtime and these days we were always starting late. Once you don’t feel like reading you’ll find a thousand and one reasons not to.

Finally, I looked around and realized what was happening. We were about to stop reading aloud altogether. So what—plenty of people get by without reading and they’re fine, right? But how sad that would be!

It was then that I realized I didn’t like what was happening and that it was I, not just the kids, that was losing something important. I recognized our unexpected crisis. Once we had it in view, we could work with it. Suddenly, I knew exactly what to do. The answer was obvious and nearly forgotten.

I don’t know when or why we stopped reading them and moved onto chapter books. Rather, I do understand why we started on longer books, but why did we never look back? It was as though we had grown out of picture books. But that wasn’t true! So one of those nights when we couldn’t agree on which of the books Nikita had read we should continue with (and we were always starting and quitting books, and moving on to others), I said a firm parental “no” and offered to read a picture book. Nikita was resentful and didn’t want to give in to my idea, but he had no choice….

Miracles followed. The first was that Vadim got up from his drawing and finally came over to read the book with us.

The second was that the next day I caught Vadim leafing through the book. He actually started to do so regularly—look carefully through the books we’d read the previous night.

The third miracle was that, as it turned out, we hadn’t grown out of picture books at all. Even I hadn’t.

Picture books aren’t just short. They’re new each time you read them. We dug up books we hadn’t read in ages and the kids would greet them with a happy “Ah! I remember this one!” I went to the library and brought back ten or so new books that we’d never read before. And then we got more! And more and more!

Yes, we read differently than we did before. Books are no longer so closely intertwined with our daily life. But when we get home late and all we can do is go straight to bed, Vadim, the youngest, issues a sleepy protest:

“But what about the book?”

Natalya Evdokimova
Translated from the Russian by Alisa Cherkasova