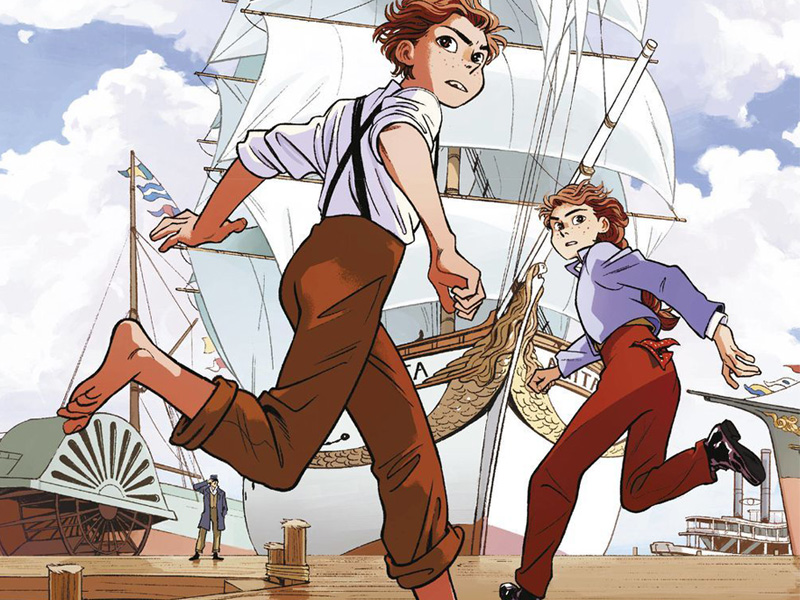 Every family should have a nice big comic book or graphic novel at home—preferably, one with a happy ending. That’s the conclusion I came to after reading Four Points by Hope Larson and Rebecca Mock. Four Points The English edition came out as two separate volumes: Compass South (Macmillan Publishers, 2018. ISBN 9781250121844) and Knife's Edge (Macmillan Publishers, 2018. ISBN 9781250158468). In Russia both parts of the series were published as one book. includes two books of the story of the Dodge twins, Alex and Cleo, who lose their father but never their hope of finding him. 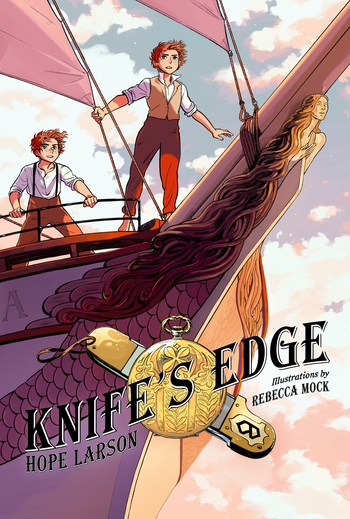 The prologue draws you right in and by the first chapter the children are involved with the Black Hook Gang, which never forgives betrayal. The pages that depict these events are drawn in dark, somber tones. The colors seem to warn the reader: dangerous adventures await. A change in scenes brings about a change in the color palette—when the twins set off for the port, hoping to escape from Black Hook, the pages acquire a soft, warm hue. The still sea, sun-gilded ship’s deck, and snow-white seagull wings promise freedom. Moments before, the twins were in danger of being thrown in prison for alleged theft. 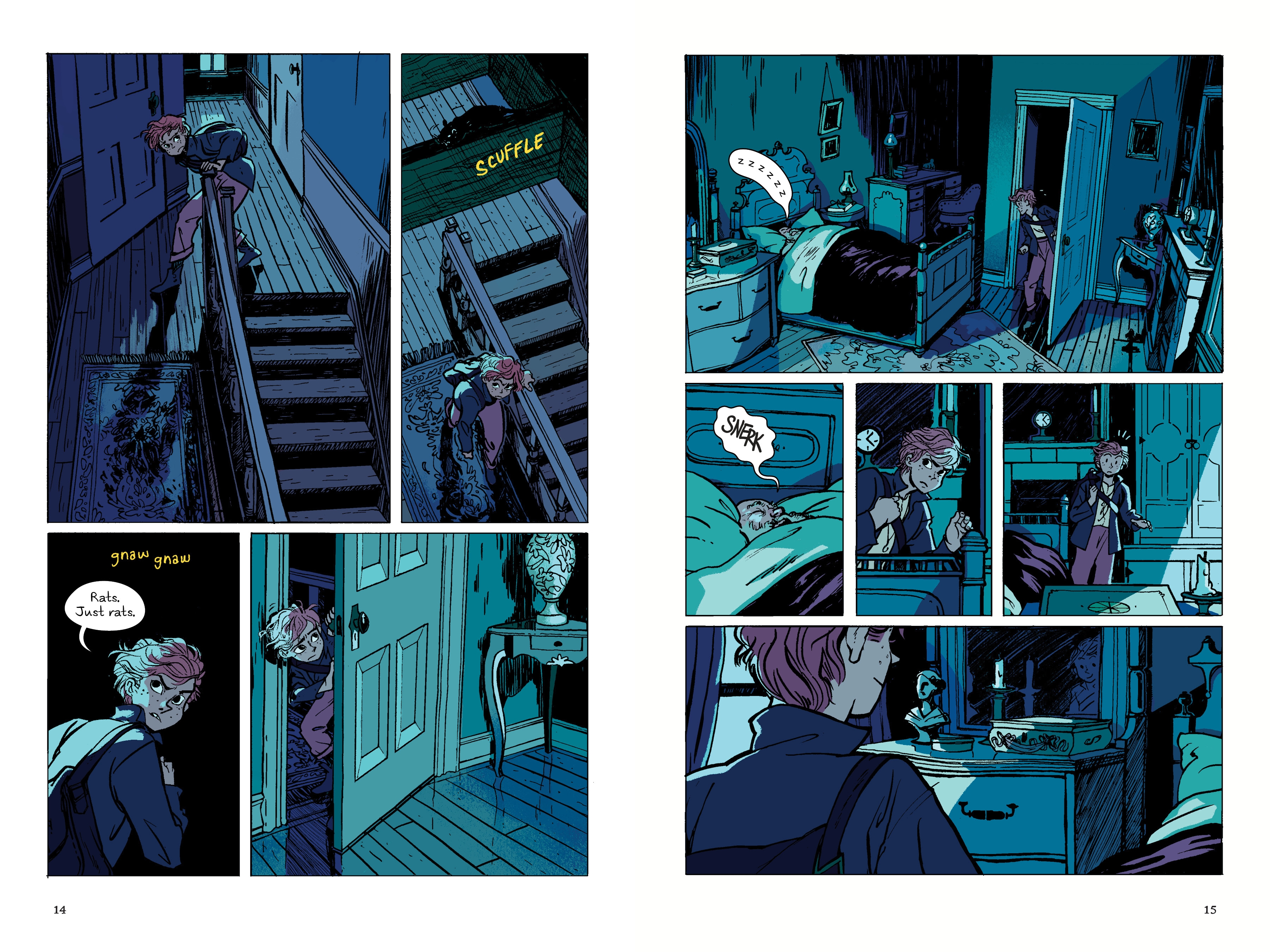 As you read this comic, you notice all the little details that make it so well-thought-out and interesting. Each red curl on the twins’ heads is carefully drawn. Items are thoughtfully placed in the comic panels. The dialogues are loaded with meaning and written with a playwright’s sense of dramatic structure.

It’s a joy to read a book that is just as much the work of its illustrator as its author. Rebecca Mock is known for her “cinematographic” GIFs and that may be one reason why the pages of the comic seem to come to life. Alex and Cleo are never static. The city streets, the port, the ship’s deck and the wild jungle are all backdrops for their adventures. Following the twins on their escapades is truly gripping: as you turn the pages, you feel as though you’re watching a series or exciting movie.

I think this comic is perfect for families where children refuse to read and spend the day in front of tablet or computer screens. Four Points is first and foremost a thrilling story. Its strength is that it’s told in pictures. The emotions and experiences are shown, not described in words. A child will easily understand what the character is feeling each moment, whether it’s happiness, anger, desperation, or shame. 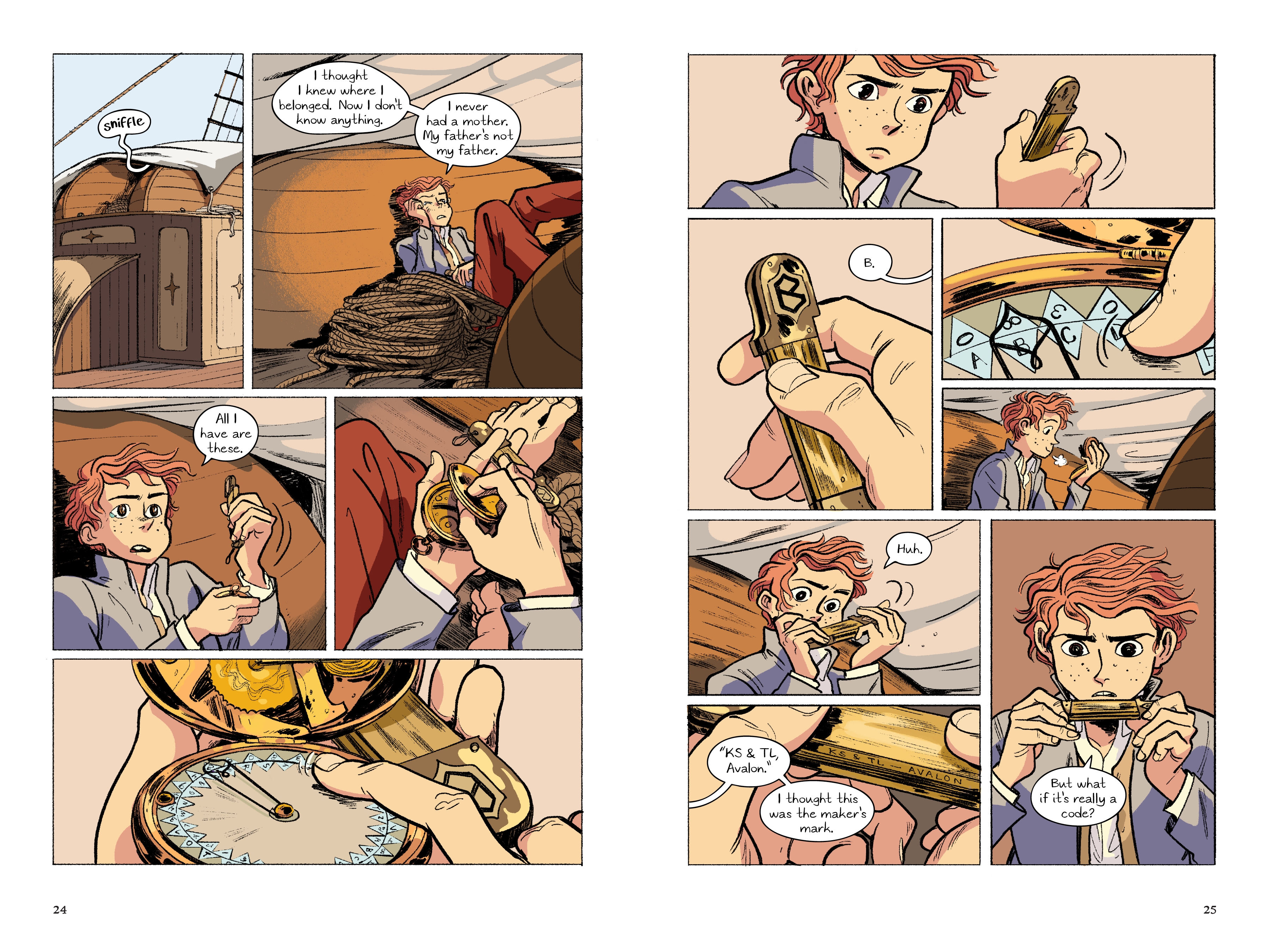 The book is labeled for children ages six and up, but my mom and I have long outgrown that wonderful age without losing our passion for adventure. At about 450 pages, this is a heavy comic, and we were able to spread it out over several evenings which—take my word it—was no easy feat. I think you can call a book great if you have trouble putting it down, and, by that criteria alone, the book absolutely qualifies.

What I liked best was how the characters discussed the topic of family. The brother and sister, thrown out onto the stormy seas of life, get closer and decide that they will go much further by rowing in the same direction. Though the kids often fight, they teach the reader that any disagreements can be resolved peacefully. Dialogue is what helps them better understand each other. I was taken with how united they were in making decisions.

Before he disappears, the father leaves the twins two valuable items bequeathed to them by their mother: a knife and a pocket watch—two halves of a treasure map. Who could pass up a chance like that to try their luck? But on their long journey the children come to understand that family is the real treasure worth guarding.