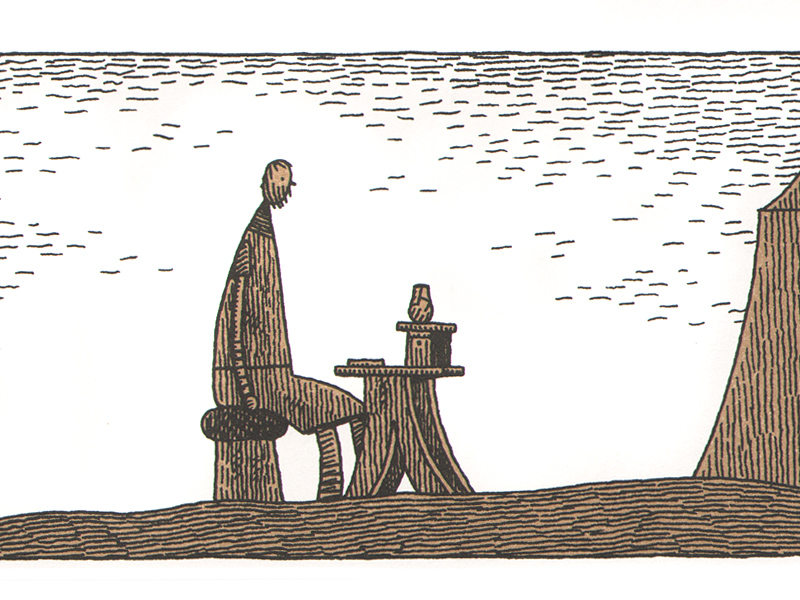 It all starts with a stone, and it will end with one. And so the Biblical story about David and Goliath’s battle comes full circle in Tom Gauld’s graphic novel Goliath Newest English edition: Drawn & Quarterly, 2014. ISBN 9781770462991. . 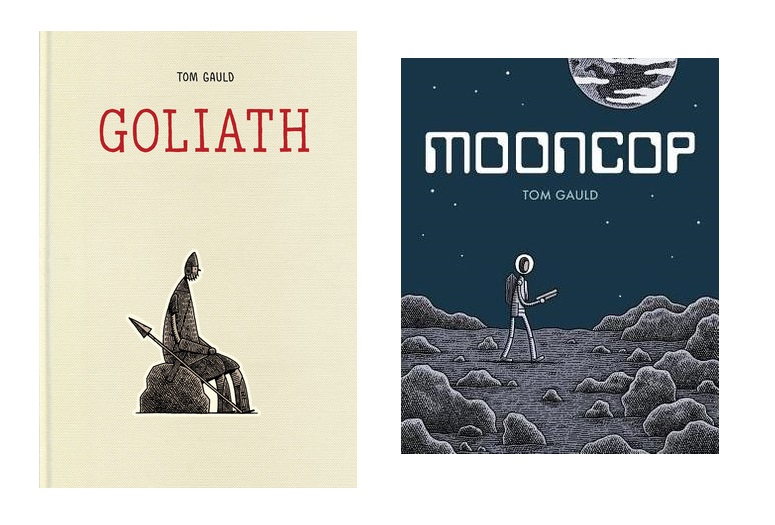 Late at night, while everyone sleeps in the Philistine camp, giant Goliath, the scribe, stacks reports in a neat pile, then goes for a walk along the riverbank. He picks up a pebble from the bottom of the river, then observes the splash it makes as he tosses it back in. The night guard tries to talk him into testing his strength by fighting the bear they keep on a chain, and offers the giant a big pay-off from winning the bets. It’s boring in the camp. The two armies have settled across from each other on the sides of the mountains, and between them lies a deserted valley. Goliath is a good administrator and he doesn’t at all like the war. But the devious captain of the Philistines comes up with a plan to win the battle. They’ll put shining armor on the giant and send him to the Israelite camp, where he will taunt and challenge them to fight him. No one asks Goliath what he thinks of this idea. Dressed in showy armor, he reads the text the captain has written for him, the words he must say in the enemy camp and...faints. For forty days the giant, head hung, waits for his nemesis in the deserted valley, until on the morning of the forty-first day the Israelite boy David comes toward him through the fog, throws a stone at his head and kills him. 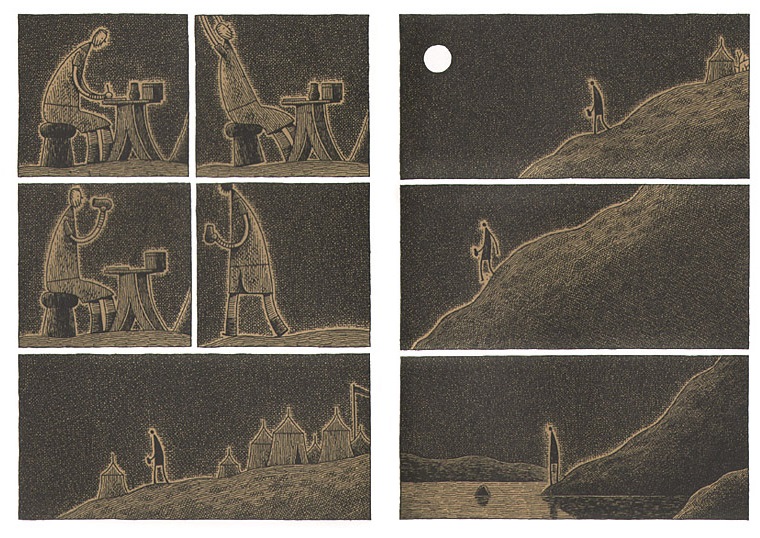 Even when you know the Biblical story, you don’t expect the novel to end this way, because you’ve sat with the awkward and unlucky Goliath looking out at the rockface and the deserted valley, knowing you’re a pawn in someone else’s game. A round moon floats overhead in the silence and, feeling for the protagonist, you see it with the eyes of that lonely giant. Beside you is a bag of things and you tell yourself you can just drop everything and run away—run away as the desperate bear did, breaking its chains. You look at your bag, that crumpled symbol of freedom. But it could be you have just a little longer to wait, to hold out for just another day. Tomorrow you’ll drop it all and set off after your dream…. But, for Goliath, that tomorrow never comes.

Another graphic novel by the very same Tom Gauld has a completely different ending. In Mooncop Newest English edition: Drawn & Quarterly, 2016. ISBN 9781770462540. , the setting is the distant future. It’s decades after an unsuccessful attempt to colonize the moon and people are gradually heading back to Earth. The last cop left on the surface looks for stray dogs, brings home a child that has wandered into the forbidden zone, and sees off the departing residents. Then he buys his daily donuts from a vending machine, and returns to his lonely apartment, with its view of Earth in the dark sky. That is, an apartment, which until recently, had a view of Earth—the prefabricated house is being taken apart, and there are fewer and fewer floors until one day the moon cop, back after work, looks out and no longer sees a familiar picture. He requests a transfer but his request is denied and Mooncop is forced to stay on the moon, where even his beloved donut vending machine is about to be removed. The police administration, worried about his psychological state, send him a robot-therapist. But the robot soon breaks down and the Mooncop sends him back down to Earth. Then he heads to the cafe that has taken the place of the donut machine. There’s just one worker there—a young woman. The cop confirms through the database that it’s just the two of them left on the moon, and sighing, invites the girl to go for a drive with him and look at the stars. 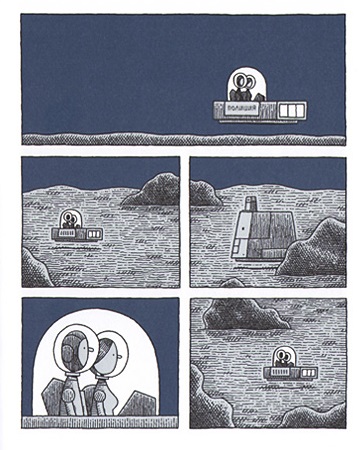 Goliath is a Biblical story about the distant past, while Mooncop is a fantasy about the future. Even so, these graphic novels are very much alike. These are stories of the “little man“—a tiny cog in a vast government machine. Both protagonists see themselves as excellent workers, but they don’t seek to stand out, express themselves, or develop their potentials. When their wishes don’t mesh with those of their superiors, neither tries to fight the circumstances or simply leave. Tom Gauld’s main characters are unlike the heroes of most comics, who are endowed with supernatural powers. Even Goliath’s great size doesn’t give him any advantage.

These are also the stories of a government system which doesn’t care in the least for those that serve it. I think that explains why the faces of these characters are not drawn in. They’re depicted symbolically, as in children’s pictures: the oval shape of the face, two dots for eyes, a little cucumber of a nose. There’s no mouth at all. The faces don’t express any emotions: they don’t laugh, cry, get angry or indignant. The author doesn’t try to foist his interpretation of the character’s feelings onto the reader. The clothes and objects around the characters are, on the other hand, drawn in great detail. We see every link in Goliath’s chainmail, every button on the Mooncop’s computer display. We see the lonely tree that has grown amongst the rocks, the moonlight on the dark water, every line in the moon’s soil. These details convey the character’s moods to the reader.

The dry British humor is another unifying element between the two novels and their protagonists. You can’t not laugh when you see Goliath’s proud little shield-bearer. Then there’s the robot-therapist, telling jokes, trying to save the Mooncop from depression.

The desert in both novels speaks to the inner concentration and loneliness of the heroes. It’s fitting—after all, the desert is only lifeless at first glance.

Ksenia Barysheva
Translated from the Russian by Alisa Cherkasova

Read an interview with Tom Gauld.