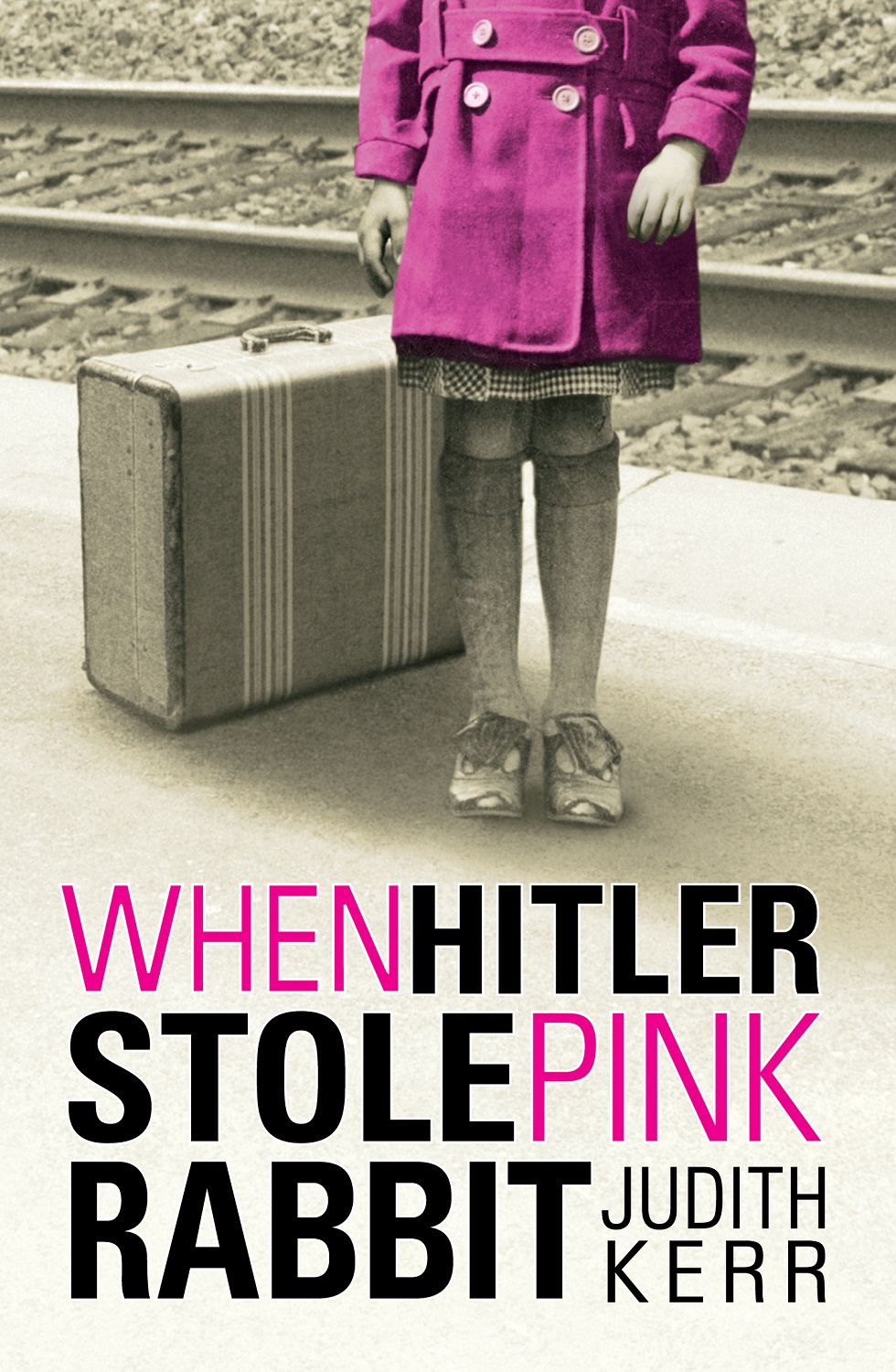 Papmambook’s teenage authors review When Hitler Stole Pink Rabbit Latest English edition: Penguin Random House, 2009. ISBN 9780142414088. , the first novel out of the semi-autobiographical trilogy Out of the Hitler Time by Judith Kerr. The novel was written in 1971 and published in Russian for the first time in 2017.

Childhood is an interesting period in life. On the one hand, a child is a full-fledged person. He can think, speak, and make conscious decisions. On the other hand, he has a completely different view of the world than adults do. He doesn’t understand many of their actions, thoughts, and behavior. So he makes sense of it and interprets it in his own way.

Anna is an eight-year-old girl in a regular German family. She lives in Berlin with her older brother, mom, and dad. Or rather, lived. Anna and her family are Jews, so staying in Germany, which has become a Nazi state, is now unsafe. Incidentally, the character of Anna is based on the British writer Judith Kerr, who tells the story of her childhood through this book.

Just before the elections that would bring Hitler to power, the family flees to Switzerland, a neutral country that offers safety. But money problems later force the family to relocate again, this time, to France, which in turn is not their final destination.

Reading Anna’s thoughts is both amusing and sad. She interprets adults’ explanations in her own way and forms a picture of the world where Hitler is a sort of fairytale villain, who has banished her family and is playing with her toys and the beloved Pink Rabbit that she left behind because they could only take what was absolutely necessary. On the one hand, it’s hard not to smile at her ideas; on the other, the humor of her childish perception doesn’t make the problem any less important for a child. And the problem is a truly universal one!

Once it becomes clear that Anna’s family will have to stay in Switzerland for a while, the girl has to start school and try to fit in with local kids. As it happens, it’s not so easy to find a mutual understanding. The local boys pursue Anna all the way home from school, throwing shoes and rocks at her. It turns out it was something of a local custom, and that was the way the schoolboys expressed their admiration and love for Anna.

Despite such cultural differences, Anna and her brother quickly adapt to life in Switzerland, where everyone speaks their native language. But after a while, their father, a well-known writer and anti-fascist, begins to have serious financial troubles and the family has to move to France. There, language as well as culture are a barrier between the children and the world around them.

For many kids, just starting at a new school is a challenge. Anna has it so much harder! She doesn’t understand anyone and no one understands her. Even a trip to the store to buy pencils becomes an ordeal. Anna didn’t have time to prepare and learn French in advance so she has to dive right in school and try to keep up with her class.

That’s how an innocent child is forced to live, overcoming her fear for her father, who has a price on his head, trying to adjust in a new setting, and learning a new language. Hitler stole her home. Home not in the sense of “the place you live,” but rather as the place where you feel comfortable.

Will she be able to find a new home to replace the one that was taken…?

Judith Kerr’s When Hitler Stole Pink Rabbit leaves much outside the frame of her narrative: the goose-stepping of stormtroopers, the cries of “Heil!” like the click of a gun being reloaded. But all that is invisibly present. Those are the reasons nine-year-old Anna and her family fled Berlin for Switzerland on the eve of the Reichstag elections of 1933.

One day, Anna is coming home from school when the nosy neighbor Fraulein Lambeck asks why her father, a well-known writer and anti-fascist, hasn’t left the house in so long. Is he that sick? That’s how Anna notices that her father barely leaves his study and then suddenly disappears altogether. Mama says he is fine, that he has just gone to Switzerland for some time, where he can work in the newspapers and that the family will join him soon but for six months at most, until the German elections are past. It can’t be that the Nazi party will win. Anna’s big brother Max agrees with Mama: no one in his class at school supports Hitler.

Packing for the trip, Anna chooses to take a new toy—a little white dog that she hasn’t played with much, and leaves behind a beloved stuffed animal that she is sure she’ll come back to. Pink Rabbit, with embroidered crosses in place of long-lost eyes, will be waiting for her in the cozy house with a picket fence, a house where it always smells like fresh strudel, where you can hear the rustle of dad’s papers, and a mosaic-like patch marks the spot where Anna spilt ink on the living room carpet.

In spite of her mother’s alarm, Anna is even a little excited to go. She has never been to Switzerland. Besides, she dreams of becoming a writer like her father and she knows, from a book she read, that real writers have difficult childhoods. In the pouring rain, Anna, Max, and Mama board the train to Zurich. Mama holds her breath and wrings her hands. They don’t say anything so as not to attract attention. Once they cross the border, a kitten suddenly peeks out of the basket of the woman sitting next to them and meows happily, as though he too knows the rules of the game.

But what Anna’s father fears comes to pass. Hitler wins the Reichstag elections and his first order of business is confiscating the property of those who have spoken out against the Nationalists. The little house in Berlin and everything in it is confiscated by the new government. Anna finds this perplexing—what use is her old Pink Rabbit to Hitler? Does he want to play with it himself?

Since all the money in her father’s accounts is confiscated along with the house, the family moves into a small guesthouse in a Swiss village. Anna attends a rural school where the ability to yodel is far more important than any other skill, girls mustn’t use the central passageway, and the boys express their affection by throwing stones at her. But there in the Alps, Anna first watches the sunrise along with her classmates and forever remembers the beauty she sees.

Meanwhile Swiss newspapers stop publishing her father’s articles, in order to maintain their neutrality with Germany. Vacationing Nazis appear in the small Swiss village and forbid their children from playing with Max and Anna. That’s when she understands that fascism has firmly rooted itself in her country.

Anna and her family move to Paris, France, where the children must learn a new language. Anna attends public school, where she can barely understand half of what is said. For the first time, her homework comes back with lots of red ink and she is just about ready to give up on her lessons when the language suddenly comes to her. She starts to respond in French without thinking, instead of going through a complicated series of steps in her head. Her new language skills serve her well as the Nazis gain more power over Germany.

One day a stranger comes to see Anna’s father and gives him the silver watch that had belonged to his friend, uncle Julius, who refused to leave the country when Hitler’s party came to power. Anna’s family understands what this gift means. Uncle Julius, who worked in a zoo, couldn’t bear to leave his beloved animals behind but the Nazis found out that his grandmother was a Jew and first forbade him from working, and then wouldn’t allow him into the zoo at all. That he couldn’t take.

Anna’s father continues to struggle with work. Many newspapers are closing in France and Anna’s family is forced to accept help from charitable organizations. Her mother learns to cook, clean, and mend clothing. When the financial situation becomes truly dire, the parents decide they must send the kids off to live with their grandparents. Anna thinks that is a terrible idea. Even though they had to move from country to country, she never felt she was a refugee because she had her family with her. In those two years of moving, she learned so much more than she would have if she had stayed in Germany.

When it seems there is no other option, a message arrives for her father. The screenplay he’s been working on for a film about Napoleon is slated for production in England.

As she steps out of the train and into the drizzling rain in yet another new country, Anna is already listening closely to the sounds of the foreign language she has yet to learn.

When Hitler Stole Pink Rabbit presents events from the perspective of nine-year-old Anna, who is based on Judith Kerr herself. Anna sees much of what is going on around her as a fun adventure. She misses the house in Berlin and her nanny, but also easily joins in the games in the French schoolyard. In telling us about fascism in Germany, Judith Kerr’s book doesn’t seek to frighten the reader but rather opens a dialogue about the dark pages in twentieth century history.

The author touches upon other important topics aside from the rise of fascism.

When the family was forced to move from Switzerland, Anna and Max had trouble parting with their new friends, the children of the guesthouse owners. But when the children return to the Swiss village for the summer holidays, they feel like outsiders. Switzerland hasn’t changed and their friends are excited to see them again, but something has changed in the children themselves. Anna and Max start to think about who they really are, and if you can stay true to yourself while moving from country to country? Who are you in a foreign country? Should you try to be like the people around you, yodeling and throwing apples at girls you like or—as Mama says—represent your own country and cherish your traditions? What does it really mean to be a refugee?

For Anna, it’s not the move from one foreign country to another that is a frightening prospect—it’s the possibility of parting with her parents, losing touch with them. Judith Kerr’s writing shows what our loved ones mean to us and expresses the importance of keeping family together.

Translated from the Russian by Alisa Cherkasova
Cover image: penguinrandomhouse.com