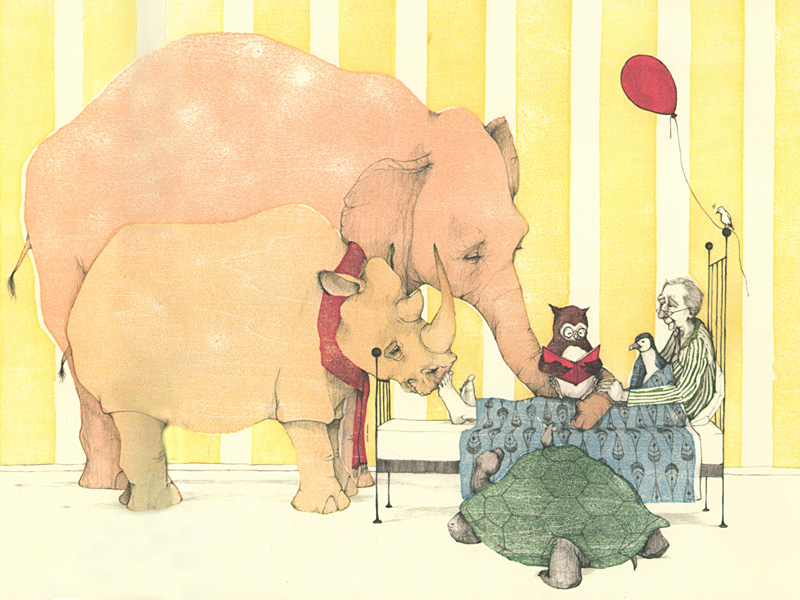 A fellow psychologist and I visited a group of thirteen- to sixteen-year-olds with hearing loss to conduct an activity as we often do in libraries. We didn’t foresee any difficulty: you can show children with hearing disabilities the text or “read” it to them in sign language. It turned out, however, that the teenagers in this school group had a very limited vocabulary, both with spoken language and sign. They were not able to express their thoughts fluently and were unfamiliar with many concepts. While these children had no intellectual disabilities and lived at home with their families, they did suffer enormous developmental delays because they had not experienced regular teaching. They weren’t sent away to specialized residential schools, but they were also very rarely spoken with and never read to. The approach we used with them may also be helpful for teachers and librarians in working with any young children.

Russian disability specialists, speech therapists, and teachers are all united in their position against using sign language to teach children with hearing loss. It’s generally thought that without it, the children will learn their native language more quickly. But Russian grammar is so difficult that a person with serious hearing impairment may find it difficult to establish the connection between words in a sentence. In this case a child can’t just “pick up” the native language and, as a result, may speak neither sign nor the spoken language with fluency. Figurative expressions, humor, and irony are all inaccessible without special training. When leafing through a book, even children with residual hearing focus on the pictures, though we might assume written language would be a primary form of communication. At the same time, computer games are as tempting for children with hearing disabilities as any others. Books are no competition—they’re simply too difficult and boring.

My colleague and I decided to help these kids build their relationship with books. Where to begin? We needed a very simple text with concrete events and no abstractions that would interesting in its plot and presentation to a teenager with no language.

We settled on Philip C. Stead‘s A Sick Day for Amos McGee Most recent English edition: Roaring Brook Press, 2018. ISBN 9781250171108. . It stood out for its simple plot and clear illustrations of all the characters’ actions. In one episode, the illustrations even tell the story with no accompanying text. The story itself is about friendship and communication—two utterly relatable topics for any teenager. 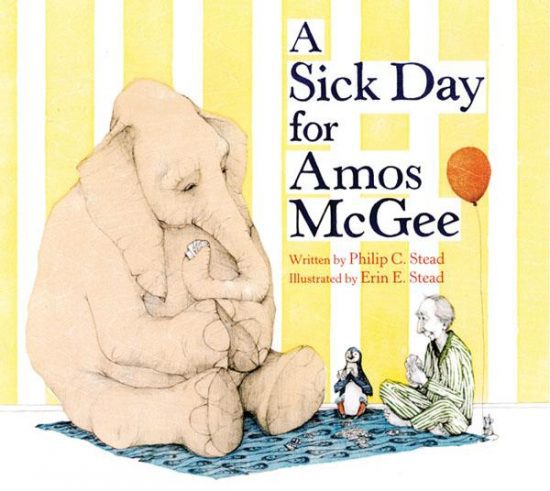 The next question was how to approach reading. We decided to read through the book several times, acting out every scene. The actors were my colleague and myself, along with the kids. The text, pictures, and skits worked together to gradually help the kids understand the plot. By taking on the role of the characters our participants understood the humor of a scene where he asks the sugar bowl for a couple spoons of sugar. Reading wasn’t enough: the meaning emerged while acting. I had always liked this book but now I saw how deep it could be. A Sick Day for Amos McGee is easily adaptable to a wide variety of activities.

Here, for example, is a simple game we played to expand our vocabularies. We printed words like “window,” “gate,” “road,” “blinds,” “sidewalk,” “porch,” and others on separate cards and asked the kids to place them on the page where Amos McGee leaves the house and heads to the bus stop. Our participants were eager to identify the right items ahead of their peers, though there were many words they could not correctly match.

One day, only one participant showed up—the rest were sick. Instead of cancelling the session, we decided to talk about the animals mentioned in the story. We had to explain that there was another bird in the story besides the owl—the penguin. As it turned out, this was far from obvious to someone without prior guidance.

One very clear and accessible assignment was to feed all the zoo’s animals. So we departed from the now familiar plot of the book and played “store.” We had a whole shopping center with the following sections: “Fruit & Vegetable,” “Meat and Fish,” “Hothouse,” and “Pet shop.” Whoever took on Amos’s role got a shopping list from the zoo director himself, with items to buy, from ants to hay. Where should you go for bananas? Where can you get mice and worms? How about grass? The kids got very involved and would call Amos over to help him figure it out. One of the kind-hearted “shopkeepers” handed our Amos something large (and imaginary) and said: “A shark!” Amos gratefully took the fish. That’s when we had to check the book. We asked: “Who needs fish to eat?” The kids figured it out on their own: “The penguin!” Amos traded the shark for a smaller fish at the store. The shopkeeper indicated the size of the new catch—just a few centimeters—and everyone laughed, but Amos decided to move on to the next item on his long list.

We also imagined what favorite activities each of the kids would share with Amos. We tried to explain the concept of “character.” The most the participants could say about one another was “kind,” “helpful,” and “class clown.” Of course, they spend a lot of their time on social media: of a teacher that had been fired they simply say “ban.”

Throughout the activities, there wasn’t very much reading as such. But the book was vital as a catalyst for communication. The sensitive, caring, slightly silly Amos McGee helped us all hear each other clearly.

Maria Klimova
Translated from the Russian by Alisa Cherkasova