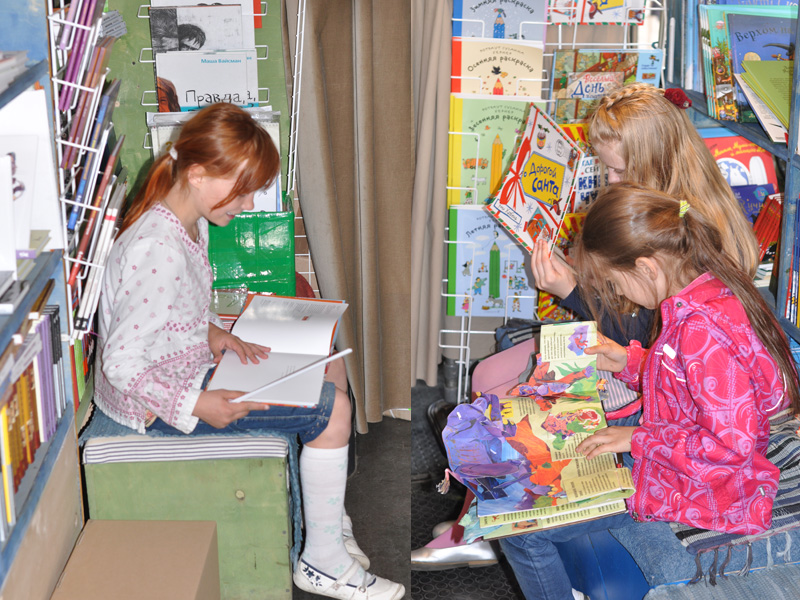 We often hear adults saying, “We want children to read. I want my child to read.” At first glance, this desire to see children reading appears universal. But only at first glance.

“He doesn’t read anything!” one mom complains. “Sometimes I try to talk him into it, sometimes I force him to. I hide the ‘toys’ from him. And turn off the TV. Dad even reached for the belt a couple times…Nothing! And, of course, at school things couldn’t be worse.”

“He sits all day, lost in his tablet. If he’d just pick up a book for once…,” says another.

“She’s reading trash! It’s unacceptable! When we were her age we read completely different books.” This third mother is indignant.

In answer to the first mother, one wants to say, “It’s fine! He doesn’t have to read! Just put away that belt!” This mother’s ideas about “the sublime” hold obvious dissonance: reading, one supposes, is a cultured activity, but here the parents are trying to instill the habit by force, which is a world apart from reading itself.

Besides, this mom is obviously conflating one issue with another. She’s not worried about reading, she’s worried about school. “Good” kids usually read books—and are good students. Clearly, there’s some sort of mystical link between reading and good grades. This mom thinks you can make a child “good” mechanically, with a series of simple actions: spank him, sit him down (if he can sit after the spanking), and hand him a book. And he better read, that little brat! Soak up some knowledge. He better not even think about bringing home another D.

Reading is indeed a fundamental skill that is foundational for learning. Without an ability to read, formal schooling is impossible. But not every “literate” child reads books. Independent reading is an important “side activity” within the child’s world, not directly linked to school and requiring separate cultivation.

The second mom also uses “doesn’t read” to mask a different problem. There’s something she doesn’t like in her child’s behavior. Maybe, from her perspective, her son doesn’t look successful enough. This mom wants her child to change—at least from the outside. Mom knows that “reading develops the mind” and “you should read.” But when was the last time the kid saw her with a book? Well, she’s exhausted. After work all she has any energy for is to plop in front of the TV and just zone out. And dad (if there is one) has more pressing matters than reading: he plays computer games to wind down. Why, then, should the child have some other form of down time? He just takes his example from the adults. He gets tired, too. He’s also “up to his neck” in school problems. All those stories about how his parents supposedly read at his age don’t work. Maybe there were no other options for their leisure time, when they were his age. Why should he believe that once upon a time (a hundred years ago) they read something? Anyway, if reading is something that’s just for kids, it won’t inspire much respect.

One mom had this answer to the question, “Do you read?”: “I don’t have the time. When I retire, I’ll take up reading.” Then give children the same opportunity. One day they’ll retire—then they’ll read too.

If reading is not part of the family’s life, the parent’s desire to see the child reading is purely utopian. Sure, you occasionally find a child who’s a reader with a mom who isn’t—or the other way around—but those are usually exceptions to the rule.

You’d think the third mom would be happy: her daughter reads. But that’s not enough. Mom doesn’t just want the girl to read but to read particular books, “mom’s” books. So can Mom vouch for every book she read as a child and would each meet her own high literary standard today? Could it be, that of everything she read in childhood, there wasn’t a single thing she would now classify as literary “trash”? Or that has become hopelessly irrelevant with age? I think the generation that grew up during the Era of Stagnation [1964-1986] in the Soviet Union read many books that have since vanished without a trace, consigned to complete oblivion. Mom would say she’s talking about something entirely different, books that have been deemed “classics.” But it’s impossible to deny that the literary tastes of those who determine what’s classic and what’s not were formed by reading, among other things, material we’d be hard pressed not to call “trash.” What if they made a mistake somewhere, and the next generation will revise that list of “classics”?

No one’s disputing the important role that books, passed down and read from one generation to the next, have in linking us. Through them we impart our language, along with a particular set of experiences and values that we want to share with our kids. Even so, children belong to their own time. Books to them are a means of communicating, not just with parents, but with each other. Each generation has its own iconic books. To read a particular book means, oftentimes, to be accepted as “one of us” in the company of other teenagers.

Is it right that adults usurp the right to choose and evaluate a book? Why not allow that the worldview of another generation is expressed in other books—those that the parents haven’t read, simply because those books weren’t around when they were growing up.

It turns out that in saying, “We want our children to read,” each of us endows the phrase with our own meaning.

I would like to explain why it’s important for me that a child read.

In 2006, A History of Reading in the West English edition: A History of Reading in the West. Edited by Guglielmo Cavallo and Roger Chartier. Translated by Lydia G. Cochrane. Amherst: University of Massachusetts Press, 1999. x, 478 pp. ISBN 1-55849-213-5 , a collection of articles by French scholars, came out in Russian. The research and discoveries in this book dazzle the imagination and, quite simply, overturn our usual understanding of the world.

We all know that for millions of years people lived without a written language, without books or reading. Even when written language finally appeared on the scene--even when it was centuries old, people read entirely differently than we do today. This is very hard to imagine. It’s hard to imagine, for instance, that the ancient Greeks did not know the methods of reading that we are familiar with today. Reading was not absolutely necessary, even for philosophers. The practice of reading “with the eyes” for pleasure did not exist for several centuries. Those were the days of oral culture. The Greeks learned the sciences “from the voice.” Much of what they heard, they committed to memory. Ancient Greek writing did not have spaces between the words, punctuation marks, capital letters, or paragraphs. To divide the text into its semantic components could only be done vocally, by “voicing” the text. This particular skill, that of taking apart the written text and reproducing it aloud, was the purview of certain specially trained slaves. It was the slaves, then, who read aloud to their masters.

Ancient Greeks in the period of Late Antiquity, and the Romans especially, did not disdain the practice of reading for themselves. Still, they also read aloud, and always in a public place—at the Roman baths, for example. Those who gathered shared the pleasures of bathing, drinking and reading. Reading aloud was a shared aesthetic experience.

The practice of reading “visually,” or “reading to oneself,” appears in the period of Europe’s Christianization, with the development of monastic culture. For the monks, reading Scripture was akin to prayer. It was a form of individual, intimate contact with God. Early monks would quietly “mumble” through the text; the written word did not yet allow for fully silent reading. Nonetheless, this was already reading “for oneself,” which earlier generations did not know. With time, writing adjusted to the needs of those reading for themselves: spaces between words appeared, along with paragraph breaks and punctuation. The monks started reading silently: reading “to oneself” emerged, a quiet practice of reading “with the eyes.”

When the Renaissance began, reading had already left the walls of the monastery. Now it was an individual activity, a personal conversation with the great people of the past, a form of personal reflection and individual intellectual pleasure. Reading was not just reading “for oneself,” it also acquired the status of personal activity, done in one’s individual space. That is to say, reading with the eyes is tied to the formation of our understanding of individuality and the value of an individual’s inner life.

The idea of children reading is a relatively new cultural phenomenon. I would argue, though, that the point is exactly the same as it was during the Renaissance: to create and organize the child’s inner world, to further the development of his or her individuality and human complexity. Reading, then, cannot be understood as anything other than the child’s private business. It’s a delicate thing, one that doesn’t respond to direct and coarse manipulation.

When we enter into conversations with books, they reveal to us the complex structure of the world and of ourselves. The more people value human complexity, the less horrific events occur in our midst.

To me, there’s no other reason than this to “fight” for children’s reading. But this is reason enough.

This view on children’s reading, I believe, should be the starting point of any pedagogical approach.